Minimum Order Value $50
Terms & Conditions Apply
Terms & Conditions - minimum order value of $50. Free shipping is only available to US zip codes. Lures will be sent from the Salmo Distribution Centre in Meer, Belgium. Deliveries are tracked and will normally be made within 10-15 working days.
&
Free Shipping

Large weed covered flats seem to hold walleye particularly through the first half of the summer. These often-large nondescript locations can be often overlooked by anglers who have been pre-programmed to look for structure.  Depending on the lake or water you are fishing, these flats can range anywhere from five to fifteen feet of water. Stained water typically sees weed growth topping out in much shallower water where water with excellent visibility might see weed growth that reaches out to twenty feet or more.

For sure, breaking contours that have emerging weeds often attract walleye but these locations also look fishier on a topographic map and often attract more attention from anglers.  The large flats that are perhaps an acre or larger however might look unassuming but don’t overlook the productivity.

My absolute favorite situation for dialing in weed flat walleyes occur when the weeds are growing up about half way down in the water column.  If there is a common mistake many anglers make, it would be trying to fish too close to the weeds to the point your presentation is fouled up.  Because these fish are often scattered over a large area, trolling crankbaits is an incredibly effective way to target these fish.

The advantage of trolling crankbaits comes from not only being able to cover water but also control your depth.  If you are covering a ten-foot flat and the weed growth is four feet high, pull your cranks about four to five feet down.  As the summer progresses and the weeds grow even higher, we often find ourselves trolling baits two to three feet down at times to skim over the tops of the weeds.  Get above the weeds and make fish come up for the bait… which they will.

Over really clear water, we often have to use planer boards to catch fish but one advantage to fishing over weeds is that any ripple seems to slightly cloud the water.  On cabbage and broader leaved variety pondweeds in particular, there is a film of residue that seems to collect on the stalks and leaves and with the slightest wind or movement, this residue breaks loose and will slightly cloud or stain the water.  This is why on really tough, flat, bluebird days, I often like to spend time fishing over weeds.  Unless you are dealing with really skinny water between the tops of the weeds and the surface, use a deeper diving crank on a short amount of line to increase your efficiency.  In other words, if you have five to ten feet of water to work with, don’t feel like you have to use a shallow running lure with a small bill that requires letting out more than thirty feet of line.  Experiment with deeper diving lures that have a larger bill so that you can pull these lures less than twenty feet from either the planer board or behind the boat to reach the desired depth.  This shortened leash speeds up cleaning weeds off lures and simply less can go wrong if you have to reel fish in over a shorter distance.  Planer boards are also much easier to read for fouled up lures when using a deeper diving lure close to the board.

Over stained water, we often find that planer boards are not as necessary and if we are in a situation where they are not necessary, we don’t use them to increase our efficiency even more.  If you can get away with simply pulling lures behind the boat, you can also tell much easier if the lure is fouled up and there is one less step when you get a fish on.

We have encountered many different nuances to these weed flat walleye patterns over the years.  Trolling speed is a huge factor to experiment with as trolling speed combined with lure running depth is usually more important than lure color.  Often, I dare say that speed and depth is often even more important than the lure.  Our procedure is to make big S-Curves if we are not catching fish so that we can figure out if the fish want the lure slow or fast.  Don’t be afraid to fish above the weeds and error on the side of high, particularly with planer boards.

These patterns often require you to get comfortable and confident in that the windows are often intense.  I personally believe that the aggressive fish position near the top of the weeds and are often cruising.  During the first half of the summer in particular when walleyes are feeding on young of the year fish hatches like bluegill, crappie and white bass, we often catch a staggering number of fish using really small profile crankbaits like the Salmo H4F Hornet.  These tiny cranks have an extremely intense action and fish much bigger than their size.  From Iowa to Wisconsin and back to the Dakotas, running these small Hornets over weed flats is just simply deadly.  Not only do you catch walleye, but you seem to catch everything with these cranks including big panfish.

Even though this pattern often takes place over relatively shallow water, electronics are still important.  Obviously, you can see how high the weeds but don’t get obsessed with looking for fish below the boat.  I prefer the Lowrance HDS Carbon for the best side imaging and what you see to the side of the boat is important.  Typically, you will see the weed growth on the side scan and fish will just look like horizontal or vertical lines and often times these lines will curve or slash as the fish are often moving.  When fish position high as they often do when aggressive, you can often see them on good side scan.  If you run a Lowrance HDS Carbon, make sure to upload the unit with the latest software that became available earlier this spring as the software update will give you much better definition further out to the sides of the boat.  This enables you to increase your range dramatically when looking for fish.

These types of weed flat locations are often under-fished but I can’t stress enough how productive these locations can be.  Walleye anglers by large are programmed to look for structure and fish close to the bottom so some anglers have a confidence hurdle to fish this pattern but the reality is that on many fisheries, these locations are some of the most productive patterns we encounter. 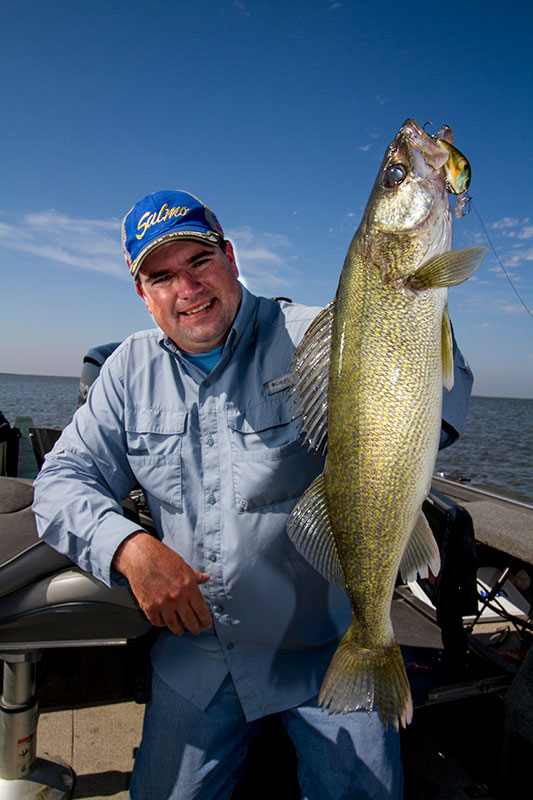